Skip to content
Home/Wine Regions/Bordeaux vs Burgundy: Which is the Best French Wine?

Bordeaux vs Burgundy: Which is the Best French Wine?

“Burgundy is for those who want to be intrigued by wine, not offered certainty in a glass” (Jasper Morris in his 2010 book Inside Burgundy).

“For me, the superiority of Bordeaux comes from its naturalness: it is born of my earth, of my sun, and of the attentive love that my people devote to it. The primary virtue of Bordeaux is honesty” (French novelist François Mauriac).

For generations the world’s most bitter wine war has raged between France’s two most illustrious wine regions, Burgundy and Bordeaux. It’s a battle which divides wine critics, pits wine lovers against each other and leaves most consumers scratching their heads.

So which is the best French wine? Well, although we have family in Bordeaux, here at Sommailier we try to love all French wines equally! Let’s take a look at the differences between these legendary rivals and try to help you figure out which is more your style.

Many of the differences between these two lofty regions largely stem from one simple factor – location.

Characterized by rolling hills and serene medieval villages, landlocked Burgundy sits just to the east of the center of France. A historically poor, insular region until the 1980s and the growing global obsession with fine Burgundian wines, the climate is continental with cold winters and fairly short summers. 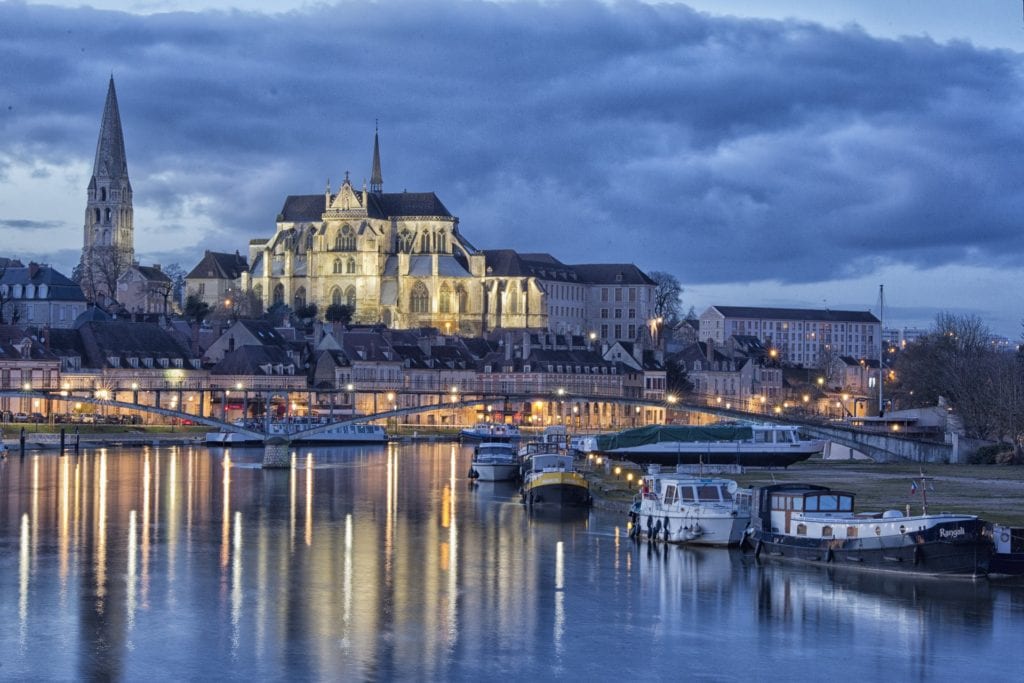 The pretty medieval city of Auxerre in Burgundy

Weather conditions often cause headaches for the Burgundian winemakers thanks to frosts and hail which can damage the vines and dramatically reduce yields if they occur during the critical springtime flowering period. Producers also have to contend with rainy autumns which can devastate the harvest by diluting the grapes and reducing their quality. These fickle conditions mean that vintages can vary considerably in Burgundy.

The personality of Burgundy’s fine wines is also shaped by the region’s soils. 200 million years ago a vast tropical sea covered this area so many Burgundian vineyards are situated on limestone. Created from decomposed ancient coral reefs and sea creature fossils, these soils nourish the vines and are accredited with giving a zesty or flinty character to white wines made in Chablis and the Côte de Beaune. In fact, the selection criteria for the very best Burgundy vineyards which are awarded the lofty Premier or Grand Cru classifications (check out our guide to reading a French wine label for more info on these) takes into account the exact soil composition of each plot as well as its orientation.

Fancy a Grand Cru, Premier Cru or Premier Grand Cru Classé? Or how about a Brut Non-vintage Champagne which was mis en bouteille au domaine by the vigneron? Chances are at some point you've found yourself bewildered by all those confusing terms on French wine bottles. Since we're such lovely people, we've created this handy Sommailier guide to help you read a French wine label like a pro! Check out the full article on our blog (link in BIO). #frenchwine

Bordeaux, on the other hand, is a sophisticated port city with plenty of stunning neoclassical buildings. The region’s success has been assisted by direct access to the Atlantic Ocean, and the British who have been ravenous consumers of the region’s wines since the medieval period.

The wine even received a mention in 1663 by London’s famed diarist Samuel Pepys who noted drinking “a sort of French wine called Ho Bryan that hath a good and most particular taste that I never met with”. He was speaking about what is today one of the region’s finest producers, the legendary Château Haut Brion. Funnily enough, this comical English pronunciation attempt actually created the rumor that the winemaker was an Irishman named O’Brian!

The proximity of the Atlantic Ocean and the presence of the Garonne and Dordogne rivers which feed into the wide Gironde estuary help to moderate temperatures and protect the vines from too much heat or cold. The flip side of this is that humidity levels are high, putting the grapes at risk of rot and disease, and weather conditions vary significantly from year to year.

This dampness has also given Bordeaux a unique gift: the luscious sweet wines of Sauternes which are made from grapes affected by a type of fungus known as noble rot. While this process might sound a little off-putting, the rot actually causes the infected grapes to shrivel and loose water content. The result is a very concentrated and incredibly sweet wine which is the perfect match for foie gras and rich blue cheeses.

The iconic Chateau Margaux in Bordeaux

This difference cuts to the heart and soul of Burgundy and Bordeaux. Although with thousands of individual winemakers and merchants it is hard to generalize, as a general rule Burgundy has a more bohemian, rebellious and earthy personality while Bordeaux exudes elegance, old-fashioned charm and a passionate appreciation for the finer things in life.

While Bordeaux has around 300,000 acres of vineyards and makes about 850 million bottles per year, Burgundy’s grape growing acreage comes in at 74,000. Due to inheritance laws which give equal rights to all the children of a family, Burgundy’s vineyards feature incredibly intricate ownership patterns. In some cases even individual rows in a vineyard may belong to different individuals. As if that wasn’t complicated enough, the wider region of Burgundy is divided into over a hundred appellations which can be limited to single villages or even single vineyards.

The complexity of figuring out who owns what and the tiny quantities of grapes involved means that wines made by negociants who buy up grapes from multiple producers are common. Alternatively, owners of vines may join cooperatives which allow them to process their grapes along with those of their neighbors.

Over in Bordeaux, the trend is for larger estates which are traditionally centered around a gorgeous chateau. Examples include the famous Chateau Margaux or Haut-Brion mentioned earlier. These estates usually make wine from their own grapes and may supplement this by buying in grapes when their own vineyards do not produce enough to meet the demands of their loyal buyers. Of course, there are also large negociants or merchants who buy up large quantities of grapes and usually produce more generic wines which fetch lower prices.

Bordeaux is divided into the Left Bank and Right Bank which are then broken down into smaller appellations. There is also a system of Five Crus or “Growths” with the top vineyards and wines awarded First Growth, the second-best awarded Second Growth, and so on down to the Fifth Growth. This rather stiff system was actually created way back in 1855 based on wine prices and very little has been changed over the intervening 170 years!

If you’ve seen the movie Sideways you’ve probably heard about the ethereal, wonderfully romantic reputation of Pinot Noir. While today it’s widely grown in Oregon, Washington and California, if you want an authentic experience of the world’s most revered black grape variety you must taste red Burgundy.

Red Burgundy has been synonymous with this one grape since the 14th century when Philip the Bold demanded the “very bad and unlawful” Gamay grape should be ripped out because the wine it produced was “harmful to human creatures”. Philip would be happy to know that the effects of his decree have endured until this day within the exception of Beaujolais, a fruity red wine made with Gamay that is often released soon after the harvest and drunk very young.

Things are much more complicated in Bordeaux. The vast majority of red Bordeaux consists of blends which will almost certainly contain Cabernet Sauvignon (especially on the Left Bank) and/or Merlot (more so on the Right Bank), plus a dash of Malbec, Cabernet Franc or Petit Verdot. Instead of allowing nature to create a pure, natural expression using just one grape variety, here winemakers lovingly hone each individual component to create a manmade masterpiece in the bottle.

Not forgetting the whites, Bordeaux winemakers blend Sauvignon Blanc and Sémillion to create both dry and sweet white wines, while white Burgundy is single varietal Chardonnay.

Both regions have their ardent fans amongst the world’s wine critics and enthusiasts. Some rave about the exclusive and incredibly expensive wines of Domaine de la Romanée Conti in Burgundy, while others are seduced by the elegant charm of the archetypal romantic Bordeaux chateau.

The truth is, though, there’s no need to take sides. With gorgeous wines at all price levels available from both Burgundy and Bordeaux, the best thing to do is to experiment and learn about French wines by trying a variety of different bottles. A great way to do this is by checking out our French wine club. Every three months we send direct to your door three or six bottles of boutique French wines which have been carefully selected by wine experts in France along with detailed information about each wine and food pairing ideas to help you really discover French wine. And as if that wasn’t enough, we also have a wine club gift option for that special wine lover in your life!